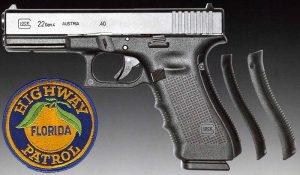 Glock introduced .45 Glock Automatic Pistol (GAP) ammunition in 2003. It was the first cartridge manufactured by the Austrian firearms manufacturer. The ammo is a rimless, straight-walled round that shares the same bullet diameter of the .45 Automatic Colt Pistol (ACP). The diameter is .451 inch. The .45 GAP is housed in a .755-inch casing, the same length as a 9mm shell). The cartridge’s overall length is 1.070 inches.

The ammo is made with a big bore bullet and uses a small pistol primer. Its maximum pressure is 23,000 pounds psi. It is ideal for self-defense and concealed carry. The round is suitable for use by civilians, military and law enforcement. It is efficient, accurate, and reliable. Glock has supplied United States law enforcement with more handguns in the last twenty years than any other weapons manufacturer.

Development of the .45 GAP

Glock aimed to design a .45 cartridge for a compact handgun that didn’t have an oversized grip. The design would allow the weapon to be used for concealed carry. In 2003, Glock introduced the Glock 37. They collaborated with ammunition designer Ernest Durham, an engineer with CCI/Speer.

Glock told Speer what it needed in new ammunition. They wanted a .45 caliber bullet housed in a case no longer than the one used for a 9mm Parabellum or .40 S&W. They also requested a cartridge that could easily fit inside a grip similar to their Model 17 or 22 pistols. The size would ensure that the gun could be used by most shooters, regardless of the size of the user’s hand.

The Popularity of the .45 GAP

The public quickly embraced the .45 GAP. As a result, several firearms manufacturers made pistols to house the new ammo. The trend died down and eventually Glock and Bond Arms became the only companies to continue production.

Some shooters falsely claim that the .45 ACP and .45 GAP are interchangeable. The extractor grooves are cut differently which makes the main difference. Additionally, the .45 GAP uses a small pistol primer whereas the .45 ACP uses a large pistol primer.

Glock’s biggest success with the .45 GAP has been with the law enforcement community. Several state law enforcement agencies use the Glock 37 with .45 GAP ammo as standard issue. The ammo has similar fire power and performance compared to the .45 ACP yet is more compact.

The Georgia State Patrol previously carried the Glock Model 37. It has replaced it with the fourth generation 9mm Glock 17. The South Carolina Highway Patrol also abandoned the Glock 37 in favor of the Glock 17 “M” also chambered in 9mm.

The Pennsylvania State Police used the Glock 37 from 2007-2013. Lack of ammunition caused the agency to adopt the fourth generation Glock 21 chambered in .45 ACP. The police experienced recall issues and switched to the SIG-Sauer P227 in .45 ACP.