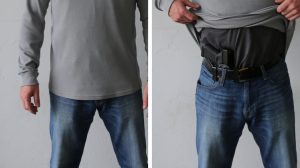 People carry concealed weapons (CCW) for various reasons, the most common of which is for personal protection. Gun owners must be trained and pass a test before they’re allowed to have a concealed firearm. States vary on their laws regarding CCW, so you shouldn’t assume that you can carry in any state. Some states, such as Virginia and California ban concealed weapons altogether, while others, such as Massachusetts and Illinois, ban them in specific areas of the state. Know your laws before you travel. If at any time you are pulled over by the police, you must tell the officer immediately if you have a loaded weapon in your vehicle. Otherwise, the consequences could be dire.

Gun owners must pick a gun that suits them regarding cost, weight, grip, caliber, and recoil. Common guns for concealed carry include .22, .357, .380, 9mm, and .45 ACP. You shouldn’t take advice from anyone other than a trained professional on which gun is best suited for you. It must feel comfortable; powerful enough to do the job but not so powerful that you won’t hit the target. Gun choices depend on what will work for you. There isn’t a certain type of gun for men and one for women.

Experts know that there is no one-size-fits-all holster. A holster should be made for the gun you use. The holster should fit snugly on the gun and be comfortable to wear, without blocking the safety or sights. Some people like to carry on the hip, while others prefer to use an inside the waistband or ankle holster. If people want their weapons to be hidden, chances are that the gun will be inside the waistband of their pants. Movies and TV shows often show people carrying a gun in the waistband of their pants, with or without a holster. A holster is the smarter way to go as it keeps the gun close to the body. Companies like Sneaky Pete and EAA make holsters for belts that look like phone or device cases. Since most people carry a phone, the holster blends into the background.

Some clothes make it impossible to carry concealed, especially in the summertime. If you want your gun to remain hidden, consider wearing shorts with a firm waistband, a light overshirt, or lightweight pants. Whatever you choose, make sure your access to the gun isn’t hindered.

Most people carry a gun on their hip, so it’s the first place someone will look. You can move the gun to a slightly different position, such as two or four o’clock, which changes your silhouette and makes the gun less obvious.

Standing up straight is good for your body, and for carrying a concealed weapon. It helps to hide the gun because your clothes will hang straight and not show off the outline of the holster or firearm. Good posture will also help with your shooting technique.

People often get shot due to the unsafe handling of their guns. Follow these safety tips and be careful. Also, remember that pulling a gun should be the last resort; if you pull it, be prepared to use it.