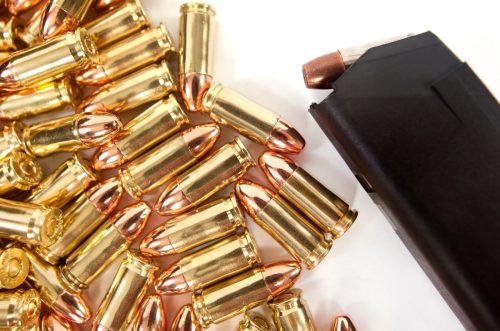 Answers to all of your most commonly asked ammunition questions.

I am passionate about the politics which go hand in hand with protecting the First and Second Amendments. That said, I do think it’s a shame that guns and politics must have anything to do with each other at all. In a perfect world, Washington would be totally agnostic about Americans’ right to bear arms and have no incentive to infringe on it. In a perfect world, loving guns and ammo would mean you’re able to only care about guns and ammo.

I have a special disdain for corporate censorship, and not just because it’s disastrous for any sort of business which refuses to adhere to the woke left’s ideology, but also because it’s an affront to the right to free speech itself – something which no one has any right to violate, even if they’re not the government.

My favorite part about my job is answering new gun owners’ questions about ammunition. In some sense, people who actually know something about guns are less likely to support ridiculous gun control measures. Knowing that suppressors don’t turn pistols into undetectable killing machines, that there’s actually no such thing as an “assault rifle” despite what the “AR” in AR-15 suggests, and that hollow-point bullets actually help to prevent harm to innocent bystanders makes one much less likely to cheer for the efforts of gun-grabbing politicians whose agenda is fueled not by love for public safety but rather by their desire to solidify the government’s control over every facet of private life.

See? You can’t help but get political about ammo, even if all I wanted to do was go over new gun owners’ most commonly asked questions.

Ammo is not intuitive to newcomers. Every cartridge is named after a number, and the numbers don’t tell you very much about the cartridges they name. For example, it flummoxes people that they can fire 38 Special in a 357 Magnum revolver but not 357 SIG. After answering new gun owners’ questions about ammo for several years, I can safely say these are the ones that pop up most frequently.

Can I Fire 9mm Ammo in a 9mm Handgun?

This is the number one question, hands down. Someone just took home a Taurus G3 or Glock 19 and wants to make sure they’re ordering the right ammo for it. Fair enough! It certainly doesn’t help that 9mm is also called 9mm Luger, or that the Europeans call it 9×19 (the numbers that are stamped on every Austrian-made 9mm Glock’s slide).

The hardest part about answering this question is doing it without making the customer sound silly. “Yes, you can fire 9mm ammunition in a 9mm handgun” sounds a little passive-aggressive, so I usually say something like “Yes indeed, sir or ma’am, your new handgun is designed to safely fire all manufacturers’ 9mm ammunition.”

This question’s nearly as common. People see the scary “+P” and worry that it’s going to blow the pistol to smithereens in their hands. That’s a fair concern because it would be very unpleasant to have that happen.

Overpressure ammo generates greater chamber pressure than standard ammo. This in turn gives the bullet a flatter trajectory and more energy to transfer to its target on impact. Virtually every modern 9mm handgun is rated to safely fire 9mm +P ammo as well. That added chamber pressure will wear out a semi-auto pistol’s moving parts faster, which is not an issue as far as ammo which you’d only use for self-defense is concerned, but you’d want to avoid doing a lot of training or target shooting with 9mm +P – or any other +P ammo, for that matter, unless you’re talking about a revolver which hasn’t got moving parts that overpressure ammo can accelerate wear and tear too.

Most manufacturers will say right in their firearms’ manuals whether or not they’re rated for +P. Barring that, Googling the name of your handgun plus “+P” will yield the information you’re looking for.

It’s harder to say when it comes to 9mm +P+. The Sporting Arms and Ammunition Manufacturers’ Institute (SAAMI) doesn’t have specifications for “+P+” and virtually no firearm manufacturer will recommend firing ammo that could theoretically be loaded to any conceivable pressure. With +P+ ammo, you want to exercise caution and probably avoid it altogether unless you really know what you’re doing. It’s not going to provide a huge advantage out in the field anyway.

I touched on this one earlier. 357 SIG ammunition was developed much more recently than 357 Magnum, and it is designed for a semi-automatic handgun instead of a revolver. 357 SIG is named after the older cartridge because it was designed to emulate its performance, not because it is interchangeable.

Look at a picture of a 357 SIG and 357 Mag round side by side and you’ll see their cases aren’t even shaped the same; the 357 SIG is bottlenecked, so it could never fit in a straight-walled 357 Mag round’s chamber. Basically, if you order 357 SIG ammo for a revolver, you’re going to wind up with an expensive paperweight and nothing else.

Once again, two rounds with the same numbers in their names are often confused for one another. 22 WMR (aka 22 Magnum) is a whole heck of a lot more powerful than 22 LR. Even if it could chamber in a 22 LR pistol or rifle, it would succeed only at blowing up the firearm upon ignition.

You can fire 22 Short in a 22 LR, though. The shorter cartridge probably won’t feed correctly in a semi-automatic firearm, but it’s great for a bolt action 22 LR when you’re just shooting squirrels in your neighborhood or want to teach a very young shooter the ropes.

Oh my goodness, no. The 300 Win Mag cartridge is way, WAY too big to chamber in a 300 AAC Blackout, and even if it could it would essentially turn your rifle into a claymore mine.

Yes! These two cartridges share virtually identical dimensions. The commercial 308 cartridge is loaded to a very slightly higher pressure, so a 308 rifle’s chamber is perfectly equipped to absorb the 7.62×51 round’s energy. The difference between the 308 and 7.62×51 is so tiny, as a matter of fact, that SAAMI doesn’t consider it unsafe to fire 308 in a 7.62×51 either. Just take care that the minute differences in cartridge dimensions may give some precision-built semi-auto rifles a hard time cycling the cartridge it wasn’t specifically designed for.

It is truly unfortunate that these two cartridges are named so similarly to one another because it causes a lot of people to mistakenly order the wrong ammo for their AK-47s. Make sure you pay attention when you order ammo online because 7.62×51 is absolutely useless as far as a 7.62×39 rifle is concerned – and vice versa.

Yes! The commercial 223 Rem does have slightly different dimensions than the military’s 5.56×45, but it’s close enough. The 223 is also loaded to a slightly lower chamber pressure, so a 5.56 chamber can handle it just fine.

But this is important: While a rifle that is exclusively chambered for 223 may safely fire 5.56 as well, we do not recommend it. The more powerful cartridge can damage a 223 rifle, even if it won’t necessarily explode to injure the shooter.

The 5.56 chamber will handle 223 serviceably, but it’s not optimal in terms of accuracy. If you really want the best of both worlds, consider getting a rifle with a 223 Wylde chamber. It’s specifically engineered to deliver the best performance with both types of ammunition!

Will a Certain Type of 22 LR Cycle My Semi-Automatic Firearm?

This one is really hard to say. Different semi-auto 22 LR firearms like different kinds of ammunition. In general, I advise sticking to 22 LR ammo with a supersonic muzzle velocity if you’re concerned about your semi-auto cycling properly. It should generate sufficient chamber pressure to make the gun feed and extract, but as a general rule, you should only assume 22 LR will function correctly if you’ve already tested it out.

Yes. Most commercially available AR-15s may not have “AR-15” in their names, but they are AR-pattern rifles all the same. To be sure, some rifles are selective about which manufacturers’ AR magazines they’ll select. Cheap steel mags from South Korea, for example, are a little bit touch and go, but in general, a reputable American magazine manufacturer like Magpul or Hexmag is always a good bet for an AR-15.

What’s the Difference Between an FMJ and a JHP?

I could write a whole article about this subject. I’ve done it several times, as a matter of fact, but I’ll keep the answer short and simple here. An FMJ is the budget-friendly bullet you want for training and target shooting. It cannot expand as it penetrates soft tissue, however, so its terminal ballistics are not optimal for personal protection.

A JHP bullet costs more, so you would only want to train with JHP ammo if you want to become intimate with its performance. (Cops often do this.) A JHP is designed to expand as it penetrates soft tissue. This ensures the bullet can distribute more of its energy outward instead of only forward, inflicts a much wider wound cavity within its target, and also reduces the chances of dangerous overpenetration.

In short, if you’re looking for handgun ammo for personal protection, you want JHP ammo. There are exceptions to this rule, as some bullets like the ARX and the Honey Badger are designed to inflict wide wound cavities without expanding in the process.

Can I Use Frangible Bullets for Home Defense?

Frangible bullets are made out of sintered metal. The sintering process essentially compresses metal powder into a solid without melting it, which enables a frangible bullet to disintegrate when it collides with a surface harder than itself. Frangible bullets are optimal for shooting steel targets, especially at close range, because they virtually eliminate the chance of dangerous splash-back or a ricochet.

Many people reason that frangible bullets would be safer for home defense, as they wish to avoid penetrating the threat or a wall that could jeopardize innocent bystanders. This is good thinking, as a frangible bullet is indeed less likely to over-penetrate. That said, there is no guarantee a frangible bullet won’t punch through multiple layers of wallboard, so the safer approach is still far from foolproof. Furthermore, frangible bullets are not as effective at neutralizing a threat as solid metal expanding bullets. Stopping a threat as quickly as possible is paramount to your personal safety, which is something to keep in mind whenever you select ammo for personal protection.

Can I Reload Steel Cases?

There are two main reasons why you want to avoid reloading steel. First, steel cases have Berdan primers. These have two flash holes instead of one, so they’re a lot harder to line up correctly. Berdan primers sizes are also a lot less standardized than Boxer primers. Second, steel cases are rigid. They won’t return to their original dimensions following ignition like brass would have, so you’ll have to resize them. That is an absolute chore.