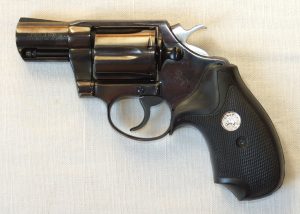 Manufactured by Colt’s Manufacturing Company in 1927, the Colt Detective Special is one of the most iconic snubnosed revolvers ever made. It’s a six-shot, double-action revolver with a 2” barrel historically used by plain clothes police detectives when carrying concealed. It also became a popular model to carry off-duty.

Colt employee John Henry Fitzgerald came up with the concept of the “Fitz Special” snubnosed revolver in the mid-1920s. Fitzgerald wanted to reduce the barrel size of the .38 Special Colt Police Positive Special revolver to make it easier for police to carry concealed. He shortened the barrel and ejector rod and removed the front of the trigger guard to enable faster trigger acquisition. Fitzgerald also modified the butt and bobbed the hammer spur to make it faster to draw without catching on the policeman’s clothing.

The Fitz Special made such an impression on Colt that they made some modifications to the design and introduced the Detective Special. Upon its release in 1927, the Detective Special became an instant success. Several law enforcement agencies worldwide still use the gun.

There have been five generations of the Detective Special, starting with the first generation in 1927. Some purists only consider the gun to have had four issues, since the fifth issue was a last-ditch attempt at reviving the weapon by making a run using spare parts.

The Detective Special was first manufactured from 1927-1946. This issue was the pared down version of the .38 Special Colt Police Positive Special revolver. Distinctive features of the “snubby” included a shortened ejector rod with an ungrooved, knurled tip; a checkered cylinder latch and hammer spur, wooden grip panels, and a “half-moon” shaped front sight. The earliest model, featuring a 2” barrel, retained the original square butt grip frame. In 1933, Colt rounded off the grip frame to make the weapon easier to conceal. Colt switched over to the rounded butt for the Detective Special. However, the original square butt was used into the 1940’s.

Detective Specials were manufactured for the U.S. Government during World War II. Due to the high demand and quick turn-around required, many of the weapons had the original square butt. Historians believe that the guns were pre-war Police Positive Specials retrofitted with 2” barrels.

The gun’s grips were known as “Coltwood,” made from a reddish-brown plastic. This was common throughout the 1940’s and 1950’s. In later years, Colt returned to using checkered American Walnut embellished with silver Colt medallions.

The second issue offered a 3” variant with a lengthened ejector rod. Colt changed to a serrated trigger spur, and the cylinder latch was smoother than the original.

Produced from 1966 to 1972, the Detective Special’s third issue only offered a minor change. Colt changed the grip frame to match the short, “stubby” frame used on the Colt Agent. Colt changed the grips to simplify and reduce the cost of production. Other changes included adding a new shroud to enclose and protect the ejector rod. Designers changed the front sight to a full ramp, and oversized wooden gripstocks covered the front frame strap.

Variations on the third issue included a limited run of nickel-plated guns as well as a 3” barrel variant.

Produced from 1973-1986, the fourth issue was the last of the series and featured the last major design change made by Colt. In 1973, Colt changed the barrel to a heavier version, adding a shroud designed to cover ramped front sight and the ejector rod. They also changed the narrow, old-style grips to a sleeker combat-style that wrapped around the frame. Additionally, the formerly grooved trigger was now smooth.

In 1986, faced with dwindling sales and rising costs, Colt discontinued the Detective Special.

Manufactured from 1993-1995, the fifth issue was a last hurrah for the Detective Special. Colt had just recovered from bankruptcy. The company decided to take leftover parts and made a short production run of Detective Specials. The reissue was an instant success.  There was enough demand from the reintroduction that Colt continued to produce the gun until 1995.  The guns were identical to the 1973 model except for the introduction of Pachmayr’s “Compac” rubber grips.

The Detective Special’s revival only lasted until 1995, when Colt introduced the stainless-steel SF-VI.

Many experts tout Colt’s Detective Special as one of the finest snubnose revolvers ever made.